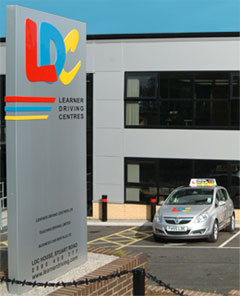 This is a real career opportunity. We are a genuine driving school with a long-established and proven track record of success. We do not act as an agent for other driving schools nor are we an instructor training company masquerading as a driving school. With LDC you are not dependent upon a third party or a superficial unproven driving school to secure your future career prospects. The company that is training you is the company that you will work with - a company with a proven and financially sound driving school business. If you are accepted you will be given a written Career Offer guaranteeing you a position with us before you commit to any training.

With the emphasis on “duty of care” and the possibility of directors being prosecuted for corporate manslaughter, companies are now taking fleet driver training much more seriously and are looking to the driver training industry to provide assessment and training schemes to safeguard their employees and reduce driving stress. These new schemes can also save companies many thousands of pounds in fleet insurance premiums. Consequently, over the next few years we expect a major increase for driver training services in the corporate area of the market place.

Insurance premiums to cover an additional learner driver on a standard motor car insurance policy have dramatically increased over the last few years, forcing many parents to have their children trained professionally rather than doing it themselves, again benefiting our industry.

Finally, on the horizon there is talk of introducing compulsory retesting of drivers every 10 years and making it compulsory for all learners to take a minimum number of professional driving lessons. As society becomes more safety conscious, training is bound to feature even more, therefore, the future for driver training could not be brighter.

After almost a decade doing a "desk job" I decided I needed a change of direction. Also, a young family meant I wanted to be more flexible with my time. Being a driving instructor was something I had considered in the past and I did have a bit of a passion for driving. So I thought I'd give it a try.

Like anybody making a life changing decision (...and it is life changing) I didn't rush into things and looked at all my options. It became clear that selecting the best company for training was vital, BUT there seemed to be a minefield of training organizations out there to choose from. After meeting with most of them I began to feel like perhaps they didn't have my best interests at heart. I really felt like they just wanted my money for seemingly sub-standard training, or wanted to charge an eye watering weekly franchise fee if I did qualify.

My meeting with LDC was different; relaxed, friendly, honest and helpful and with no hard sell. The options were made clear to me and LDC seemed very confident in their top quality training and what they could offer me once I had qualified as an ADI. It was clear that after doing all my homework on other training and driving schools, LDC was the one that stood above the rest.

Training with LDC was a pleasure. I continued with my office job whilst I trained, fitting in the theory work on an evening and the one-to-one lessons with a tutor on a weekend. The learning materials included for all three parts of the ADI exam were faultless, making things that much simpler. The in-car training was direct and highly professional, while still maintaining a relaxed and enjoyable atmosphere. Throughout, support was always available either via my tutor, or the dedicated training department at LDC Head Office. All together the amazing training allowed me to pass all three of my ADI exams FIRST TIME, even achieving a high grade! I was also safe in the knowledge that should I want to join LDC, the option was there. Or I was free to go it alone as an independent instructor.

I decided to stay with LDC because after such first class training and the welcoming nature of the company I knew that they would be there to support me, especially when first starting up as a newly qualified ADI. The flexible LDC franchise and the training materials, including the brilliant LD System, also make the company pretty attractive. I have the flexibility of an independent instructor along with the support of a large national driving school. Plus the very reasonable franchise fee means I'm not working half my week to pay to the driving school. The first couple of lessons cover the franchise fee, so the rest is mine. In addition, the excellent training materials on offer help give that edge over other driving schools.

I'm now enjoying a successful career as an ADI, and have not looked back once. My pass rate remains high and work flow consistent. I'm now looking at exciting options to further my career and open up new roads to me in driver training. Thanks LDC.

From my initial contact with LDC everyone was friendly and appeared genuinely interested in my enquiries. The training resources and support were good, and the price competitive. I was able to progress at a pace comfortable for me, carrying on a part-time job, and so no feeling of pressure. Using the student's internet forum I was able to learn a lot from others, and realise that I was not alone in my highs and lows. Support and leads from LDC whilst on a trainee licence, and the free additional training I received, gave me valuable experience and confidence to approach the final hurdle, the Part 3 test, feeling prepared for the antics of the examiner!

Having received LDC's support in training, I chose to stay with the franchise and having looked elsewhere and chatted to other instructors I appreciate that it is a very flexible arrangement for a reasonable monthly fee. I can do my own thing and generate my own pupils, but support is there when I need it. The pupils like the system of tuition with the books and DVDs, and I like to have my own choice of car but with the eye catching logos which get me noticed on the street. I can see that without LDC it could be very lonely out there!

Like many other potential ADI's my first decision was which company to use for my training. After researching two or three options it became obvious that one, LDC, was head and shoulders above the rest. LDC ticked ALL the boxes - from the comprehensive training they offered and the low franchise fee through to the support offered during and after qualifying.

Parts One and Two were passed first time, but when I struggled with Part 3 (failing twice) this is when LDC really came into their own. Extra training had already been offered, at NO further cost, after my first failed attempt then after my second fail, just when I thought the world was against me, Malcolm suggested I made the trip up to Head Office in Pontefract for some further training. I did as he suggested and received a further six hours of training, again at NO further cost, with Val Wood the head of the Training Department - then successfully passed my final attempt the following day ~ PHEW !! On my return to Head Office following my test all the team were genuinely delighted that I'd passed ~ that's what it's like - EVERYONE is made to feel special. A great team ethic.

A 3-day induction course followed with Bob Morton which, as well as being really interesting and informative, was also very relaxed and great fun.

A personalised website, Facebook/Google + page, discounted stock and some fantastic IT support are just a few of the things that the LDC driving school franchise offer their instructors ~ just what's needed when venturing out into the big wide world of Driver Training.

Being a driving instructor is a fantastic job - its a great feeling waking up in the morning actually looking forward to going to work!!!

My only regret about joining LDC ~ I should have done it YEARS ago !!!